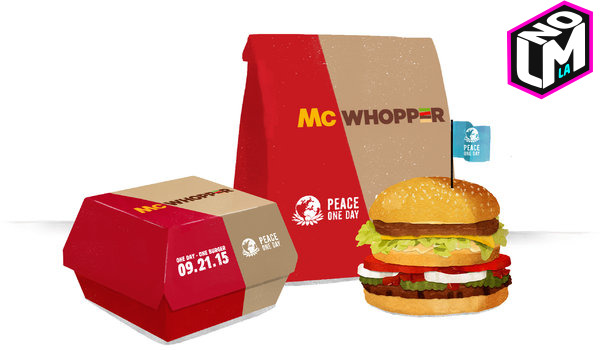 The Burger King & Ronald McDonald are looking to set a truce for World Peace.

Burger King has ran an ad in The New York Times and The Chicago Tribune on Wednesday asking its Archrival with the Golden Arches to join forces for a day.

The idea is to operate one pop up restaurant in the parking lot between a Burger king and McDonald's in Atlanta, Georgia, with employees from both companies serving a "McWhopper" a blend of both the Big Mac and the Whopper, the best selling sandwiches at both restaurants.

The ultimate goal is to donate sales proceeds to Peace One Day, a nonprofit group seeking to raise awareness of the International Day of Peace, which was established by the United Nations General Assembly in 1981 for the opening of its annual meeting.

McDonald's even sent out a tweet to Burger King, making it sound like this East Coast / West Coast style truce might not just be a vision any longer.

Hey, if McDonald's and Burger King can join forces for the sake of World Peace… Then Anybody Can.

I want a McWhopper Now !!