does your school really matter 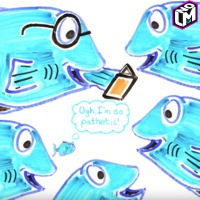 Would you rather be a big fish in a small pond or small fish in a large pond? Do we compare ourselves to our peers in the same boat as us? Probably so.. The guys over at AsapSCIENCE brought in the science aspect of math results of an 'average' college and compared them with universities of an Ivy League school.

The question through science is…is it better to be smarter than your peers at a average school rather than attending a school where your peers are super smart and your below average? Is confidence more important than which university you go to? Watch the science behind this theory.