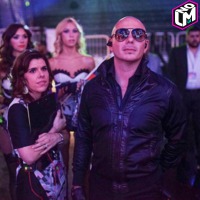 Looks like a Raging Pitbull can now be added to the list of Celebrities boycotting Trump Properties.

In a video interview on Fusion's "America With Jorge Ramos", Pitbull attempted to make sense of Trump's now infamous speech where he made some incendiary statements about Mexican Immigrants. Pitbull told Jorge Ramos "Donald Trump doesn't become Donald Trump by being ignorant. He may have a big ego — we've all known that for years. What I think is that he found a button (illegal immigration) that he likes, and he sees that he got people mad and hot and he's gonna keep pushing it."

The speech Pitbull is referring to is last month's Presidential Campaign Launch for the Donald on Tuesday June 16th where among other things, said Mexicans are "Bringing Drugs. They're Bringing Crime. They're Rapists" The speech has angered Latins Worldwide, making Trump Public Enemy #1 for all those rooted in Latin Heritage from America Ferrera to Eva Longoria. And it seems Pitbull is no different as he said during his Fusion interview when asked if he would ever enter another Trump Property, "Due to the fact of what has been said, no, I wouldn't be able to go to his hotels," Pitbull said. "I just can't. I can't for the simple fact that you're speaking about a culture that I ride, I die for."

During Pitbull's recent acceptance speech at Thursday's Premios Juventud Awards ceremony, Pitbull made sure his feelings of Trump were kept no secret, warning the on-again off-again Billionaire to watch out for Escaped Drug Lord "El Chapo". The Miami-born Cuban Rapper even tried to encourage Republican Candidate Jeb Bush and Democratic Hopeful Hilary Clinton to "ponte las pilas" which roughly translates to "Step Your Game Up"

The recent boycotting of Trump has been made publicly known by Companies and Celebrities like Univision, NBC (who dropped Trump Miss USA Pageant) and Flo Rida.