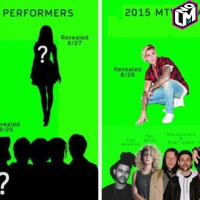 The VMA's are just around the corner, and MTV has been releasing teasers starring Miley Cyrus ever since they announced her as the host. The show is on Sunday (August 30th), and they have just announced some of the performers.

The Weeknd, Tori Kelly, Macklemore & Ryan Lewis, Demi Lovato, Twenty One Pilots with A$AP Rocky and Pharrell are confirmed to be taking the stage at the VMAs.

MTV revealed the shadow of two more artists, who are officially being announced tomorrow (August 26th) and on Thursday (August 27th). But the fans were faster than everyone and already guessed the two artists by their shadows… They are… Justin Bieber and Nicki Minaj!

Kanye West is this year's 2015 Video Vanguard Award, and rumor has it that Taylor Swift will be the one handing him the award. Awk or not?

Britney Spears, Beyonce, The Beatles and Madonna are some of the previous winners of the Video Vanguard Award.

Whose performance are you excited to see? Comment below!